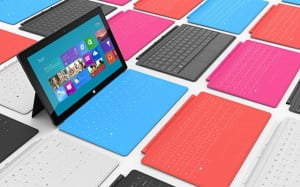 Microsoft is setting the stage to release its tablet the ‘Surface’ running Microsoft’s latest OS offering — the Windows 8.

Surface will have two versions: Surface RT, powered by an ARM chip running on Windows RT, another version of the new OS, and an Intel-based version called Surface Pro.

Microsoft is planning a midnight launch for the Surface on October 25, as the firm seeks to build momentum ahead of its debut in the tablet market.

The screens on the Surface account for the biggest in the tablet PC market. With major players like Apple, Samsung dealing in 10-inch category, the Surface comes in as a refreshed choice for customers who wish to go for something more than iOS and Android.

Surface will feature both front and back cameras. The front-facing camera is termed by Microsoft as Life Cam.

With Microsoft-owned Skype, video chats will add to the viewing experience of Surface. The rear camera is capable of video capture and taking images.

Add touch keyboards to the tablet and the device turns into a small notebook.

The Touch Cover, which is amazingly 3mm, can be connected to the Surface tablet with a magnetic click, enabling easy texting and mailing.

Surface comes with a built-in kickstand. Be it portrait or landscape modes, the Surface can achieve just that with the integrated kickstand. Watching movies or going through photos will be a different experience as the tablet needs only to be propped up by the kickstand.

With the Surface tablet, running out of space might not be a problem. Microsoft has given Surface many storage options from 32GB, 64GB and 128GB. If that much space doesn’t suffice, the company has also given memory expansion options owing to the inclusion of a microSD card slot. Now you can add space to the Surface with a memory stick, keeping your extra data on an external medium.

CEO Steve Ballmer recently suggested that the Surface would figure in the USD 300 to USD 800 bracket quashing claims that the device will start selling at USD 199. Even still, Microsoft refuses to comment on the speculative pricing of its devices though earlier in the year Microsoft claimed the tablet would cost a “competitive” amount.