Possibilities to downgrade from iOS 7 to iOS 6

Possibilities to downgrade from iOS 7 to iOS 6 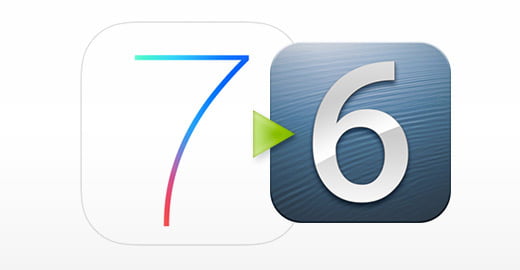 “How can an I switch back to iOS 6?” , “Downgrade from iOS 7 iOS6?”, “Remove iOS7 update”… these are the questions which are expected from some users after updating their iPhones/iPods/iPads to iOS7. in Short, NO you cannot switch back to iOS 6 once you update your apple device to iOS 7 (unless you have a SHSH blobs backup with you). We can see many guides on internet which shows to downgrade iOS 7 to iOS 6, they actually refer to iOS7 beta version where you can easily downgrade to iOS6.

Now that the official iOS 7 release is here, Apple will stop allowing users to upgrade to versions of  iOS 6. This means that short of any errors on Apple’s end, downgrading from iOS 7 to iOS 6 is out of the question. Apple routinely stops signing old versions of iOS when it releases a new one. This means even if you download iOS 6 for the iPhone5, you will not be able to complete the installation because Apple’s servers will not allow the final part of the update to complete, leaving users stuck until they restore to iOS 7, but if you have already saved SHSH blobs you can restore your device. You can use TinyUmbrella, a popular tool in the jailbreak community to save your SHSH blobs.

If you are not sure it’s a good idea to wait a few weeks to see if you like how it performs on a friend’s device. Apple is reportedly working on an iOS 7.1 update already, which could fix any issues on iOS 7.