by techfeatured
in iOS, Mobiles, News
0 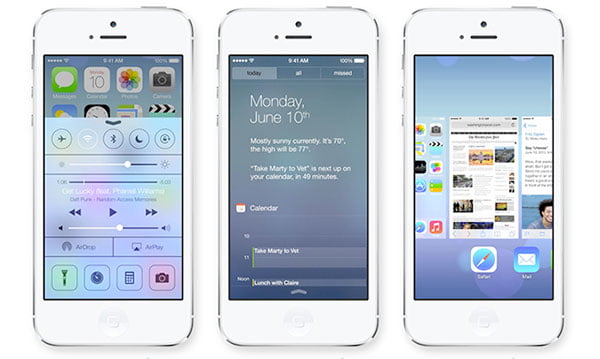 At WWDC 2013, Apple debuted its latest iOS update, iOS 7, a piece of software that not only brings new features to owners of the company’s iPhone, iPad and iPod touch, but also delivers a brand new look that will be far different than the iOS design that was employed in iOS 6, iOS 5 and the software updates before them.

The iOS 7 update will releasing to the public on September 18, 2013 . Millions of iPhone users around the world are waiting to download the software. Apple has already updated iOS page on its website showing the revamped interface and new features of iOS 7. The site states: “iOS 7 introduces great new features like Control Center, AirDrop for iOS, and smarter multitasking. It also makes the things you do every day even easier, faster, and more enjoyable. And while many of the apps look different, the way you do things feels perfectly familiar. So from day one, you know how to use the world’s most advanced mobile OS. In its most advanced form.”

Apple announced that it would be making the update available to the iPhone 5, iPhone 4S, iPhone 4, iPad mini, iPad 2, iPad 3, iPad 4 and iPod touch fifth-generation starting tomorrow which means that owners of all of those devices will be able to download and install the iOS 7 update when Apple makes it available.

Once an iPhone, iPad or iPod touch owner installs iOS 7, there is no going back to iOS 6. So, we suggest that prior to installing iOS 7, owners should dig into iOS 7 and make sure that it’s an update that they want to install on day one.

iOS 7 is full of changes including new features, new icons and updates to Apple’s core applications. And that means that someone who is used to iOS 6, but hasn’t used iOS 7 and all of its feature changes and design changes, is going to be extremely confused once iOS 7 is downloaded. And believe us, there will be those that blindly install iOS 7 without any research and will immediately want to go back to iOS 6.

Tips on how to get iOS 7 as soon as absolutely possible:

Update: Check this for iOS 7 country wise release time chart  for all countries in the world.