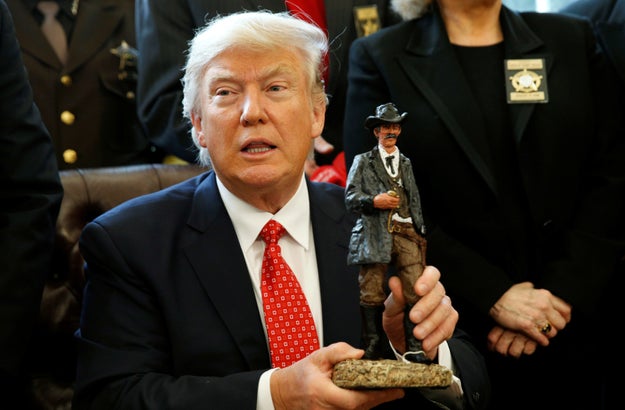 President Donald Trump keeps saying that murder is on the rise in America — but law enforcement statistics collected by the government say otherwise.

At a listening session with County Sheriffs on Tuesday morning, Trump said that the murder rate in the US is at its highest in “45-47 years.”

But according to the most recent complete data from the FBI's Uniform Crime Reporting, the US murder rate was 5.0 homicides per 100,000 in 2015. These are not peak numbers.

BuzzFeed News reached out to the White House to ask where Trump is getting his homicide numbers from, but didn’t immediately hear back.

However, the same 2015 report also illustrates that this spike is not an accurate depiction of the country at large.

According to the FBI report, the 11% spike was largely driven by seven cities that saw sharp increases in murders from 2014 to 2015: Chicago, Baltimore, Houston, Milwaukee, Philadelphia, Kansas City, and Washington, DC.

Fox notes that one reason that this one-year spike in the homicide rate in 2015 occurred was because the number had reached such a low in 2014. According to the FBI’s UCR, in 2014 there were 4.5 murders per 100,000 people nationwide. “It wouldn’t be such a huge jump if the base number wasn’t so low,” Fox says.

“Basically, we’re a victim of our own success,” Fox said. “If we had not brought our homicide rate down by half in 25 years we wouldn’t be saying this jump was so remarkable. For example, say you’re 300 pounds, you go on a diet and you lose 200 pounds, then you put on 10. It doesn’t mean you’re back where you were.”

“The claim the we are at a peak homicide rate is ludicrous.”

And Carnegie Mellon University's Dr. Alfred Blumstein, who researches crime statistics, said, “The claim the we are at a peak homicide rate is ludicrous. In recent decades,the peak has been about 10 per 100,000, and the current rate is about half that previous peak.”

This is not the first time Trump has spoken out about an increase in homicides in America or pushed a false narrative that murders are on the rise across the country — despite the fact that there are more recent, complete, accurate, and true numbers available.

Speaking at a GOP retreat in Philadelphia last week, Trump told a group of Republican lawmakers that the murder rate in Philly is “steady, I mean just terribly increasing.” However, that is not true.

Trump’s comment prompted Philadelphia Mayor Jim Kenney to put out a statement calling the president’s “false statements” about the murder rate in Philly “an insult to the men and women of the Philadelphia police force—the very same men and women who are working long hours today to ensure his safety.”

Trump also claimed at the Philly retreat that the murder rate in the country’s largest 30 cities increased by an estimated 14% in 2016. This statistic, while accurate, is misleading. According to the Brennan Center for Justice, which looked at the increase in murders last year, the record number of killings in Chicago in 2016 account for 43% of this overall increase in cities nationwide. In 2016, Chicago police said the city suffered 762 murders, more than New York and Los Angeles combined.

Trump has been vocal about the violence plaguing Chicago. On Jan. 31, he tweeted that if the city didn’t fix the “carnage” he would “send in the Feds!” In an interview with ABC News, Trump said “Afghanistan is not like what’s happening in Chicago.”

Trump’s team also used sketchy crime stats to tout his “law and order” agenda on the White House’s website. In a post titled Standing Up For Our Law Enforcement Community, the administration published this claim about Washington DC’s murder rate: “In our nation’s capital, killings have risen 50 percent.”

In fact, in 2016 the number of murders in the capital declined 17%. After BuzzFeed News tweeted that the post was misleading, the Trump team updated the post to say “In our nation’s capital, killings rose by 50 percent over the past four years.”

On Trump’s repeated use of these misleading statistics, Dr. Fox said, the President is “cherry picking numbers and casting it in a light that makes it look bad.”