This Plan For "Making EPA Great Again" Has Industry Helping Out

This Plan For "Making EPA Great Again" Has Industry Helping Out 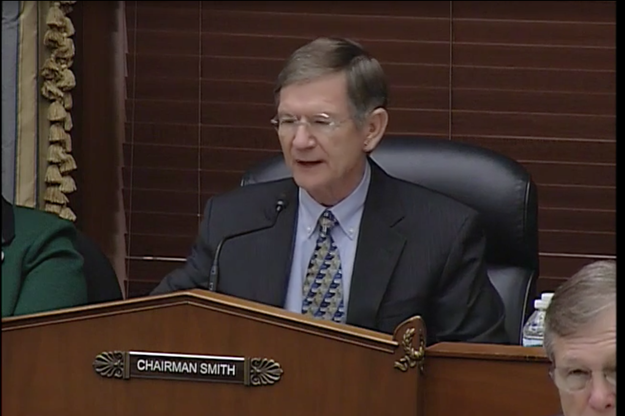 WASHINGTON — A Congressional committee rolled out plans to give industry voices more say on how the Environmental Protection Agency regulates polluters, at a hearing on Tuesday that featured witnesses from the chemical and utility industries.

Rep. Lamar Smith of Texas, chairman of the House Committee on Science, Space, and Technology, also laid out a law meant to scrutinize “secret” data — patient data and case reports of pollution events — used by the agency to craft regulations.

“American deserve to see the science for themselves,” Smith said at the hearing, titled “Making EPA Great Again.” “If the EPA has nothing to hide, why not make the scientific data it uses for its regulations publicly available? What is the EPA hiding.”

In 2015, Smith sponsored a bill called the Secret Science Reform Act. That bill, which came out of Smith's science committee, would bar the EPA from making new regulations that rely on data that is not public.

That bill passed the House of Representatives, but after then President Obama threatened to veto the bill if it landed on his desk it never received a vote in the Senate. Smith didn't try again in 2016.

Now with a Trump administration eager to remold the EPA, Smith is emboldened.

“This year we will pursue similar legislative remedies and hold the EPA accountable to the America people,” Smith said.

While a call for more transparency seems benign on its face, environmentalists and others such as Rep. Don Beyer of Virginia, a Democrat on the science committee, argued that such legislation is simply a pretext for making the job of EPA scientists more difficult.

Much of the research the EPA relies on to craft air and water rules are, for example, health studies that contain personal information on patients and their family members. Disclosing data from, say, an asthma study would violate health privacy laws — and, depending how the ultimate piece of legislation is written, would preclude the EPA from that science in its rule-making process.

”Simply put, limiting the science the EPA uses limits the actions the EPA take to protect public health,” Rep. Eddie Bernice Johnson of Texas, who is the top Democrat on the committee, said.

Smith also identified another legislative target: the EPA's Science Advisory Board, which is made up of scientists there to advise EPA officials on regulations.

EPA critics like Reps. Smith and Frank Lucas of Oklahoma say that the current board's roster of scientists simply repeat what the agency already thinks, because the head of the agency appoints its members.

“I’m concerned that the body has become an echo chamber for the EPA,” Lucas said at the hearing.

In 2015, he introduced a piece of legislation to reform the board. That bill ultimately failed, but a new version may find a new life in Congress.

“The EPA routinely stacks this board with friendly scientists who receive millions of dollars in grants from the federal government,” Smith said. “The conflict of interest here is clear.”

But when previous versions of the reform bill have come to the floor, environmental groups such as the Natural Resources Defense Council have said the law, if passed, will only create clear conflicts of interest by creating paths for placing industry-funded scientists onto the board.

While Obama was president and held veto power, Smith's legislative agenda was a pipe dream. The House Science Committee could do little more to engage the White House than to tweet its disapproval of efforts to reduce emissions of greenhouse gases and address climate change.

Smith did, however, retain the power of subpoena. He wielded it to demand documents from scientists at the National Oceanic and Atmospheric Administration regarding a 2015 paper in the journal Science that found the long-theorized “pause” in global warming during the previous decade had never happened.

“I think there will be a lot fewer subpoenas in this Congress than in the last,” he said.

But he did not relent in his criticism of NOAA during the hearing. On Sunday, the Daily Mail published an article saying internal NOAA procedures weren’t followed to conduct the study and “exaggerated global warming.”

The claim of data manipulation was refuted by several climate scientists, including John Bates, The Daily Mail’s main source for the story, in an interview with E&E News on Tuesday. (The Science paper was independently confirmed in a separate study last month.)

But Smith pressed hearing witness Rush Holt — a former Congressman and the chief executive of the American Association for the Advancement of Science, which publishes the journal Science — to consider retraction of the 2015 NOAA study.

“Are AAAS and Science committed to taking these allegations seriously?” Smith asked.

“This is not the making of a big scandal,” Holt concluded. “There is nothing the current paper that requires retraction.”