France's Left Is Hoping A Young Independent Candidate Can Save Them

France's Left Is Hoping A Young Independent Candidate Can Save Them 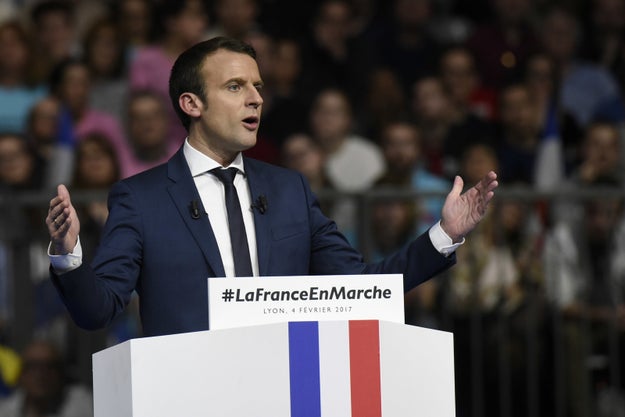 LYON, France — Bernard had just come out of the metro and was already irritated by hundreds of people rushing in front of the Palais des Sports. But despite his distaste for crowds, this 59-year-old retiree said he is a regular at political rallies. He's toured plenty of convention centers and arenas over the past two decades as a Socialist Party member, listening to politicians defend his ideals. Last Saturday, he came out to hear from Emmanuel Macron, a candidate who has created a movement that is “neither from the right, nor from the left.”

France’s once-strong Socialist Party faces an uphill battle in this spring’s presidential race. The party’s own President François Hollande is highly unpopular and is not seeking re-election. Socialists voters chose Benoît Hamon as their candidate, but Macron, the 39-year-old former Economy Minister, an ex-Socialist turned independent, has a lot of momentum behind him. Other leading candidates in the contest are the far-right National Front's Marine Le Pen and the center-right Les Républicains party's François Fillon, who has been dogged by a scandal over payments made to his wife.

Bernard, the Socialist Party veteran, watched as Macron made his pitch to voters before a packed arena in Lyon, where Le Pen was also campaigning that weekend.

“Macron is more in line with current values, he is the candidate of modernity, the youngest among them,” he told BuzzFeed France, adjusting a cap with the colors of his favorite football team, the Olympique Lyonnais. “Today, we live in a society where a compromise between the liberal and the social must be made, and if we want to unblock the French society and economy, we must get out of political patterns, of these old parties that have been indulging in fake new ideas for years.”

It was the second Macron rally Bernard had attended. He's voted for the Socialist Party in every election since its candidate François Mitterrand became president in 1981 and served through 1995. But this year, he said he will cast his ballot for Macron.

“The two-party system logic, right-left, does not exist anymore.”

“There are lots of people who identify with what Macron says, because the two-party system logic, right-left, does not exist anymore,” she told BuzzFeed France.

There were still seats available in the last few rows of the hall, but Sarah, a 32-year-old childcare worker, had faith. “Macron is the only one who can fill up such large rooms,” she said. She told BuzzFeed France how disappointed she has been with Hollande's presidency and blamed infighting by the “trouble-makers” who have “torpedoed what remained of the Socialist Party.”

“My parents were fervent socialist voters, and I inherited that, but Hollande made me want to never vote for the Socialist Party again,” Sarah said. She believes Macron will be able to take “the social-liberal turn that France needs to take.”

“Hamon is a man who is at the service of ideas that the Socialist Party used to defend 30 years ago.”

Laure, an executive and a mother of two girls who came out for her first-ever political rally, told BuzzFeed France she had always voted for the Socialist Party. But she was quick to admit that her “ideas are evolving a bit more towards the right with age.” She said she has also been disappointed by “Hollandism” and the left in general, and despite not knowing all the details of Macron's policy proposals, she knows he will get her vote.

“I have always voted for the Socialist Party candidate, but for Benoît Hamon, it is not possible! He has proposed crippling measures, he does not embody an alternative, while in 2017, we need to get out of classic patterns,” she said.

One of Laure's neighbors told her the Socialist Party is dead. She's not sure if that is true yet, but she said is certain about not wanting to see the same faces leading France.

“People blame Emmanuel Macron of being a banker, but at least he has worked in his life,” she said. “Unlike all those candidates who have only been in politics and who pretend to know what work is.”