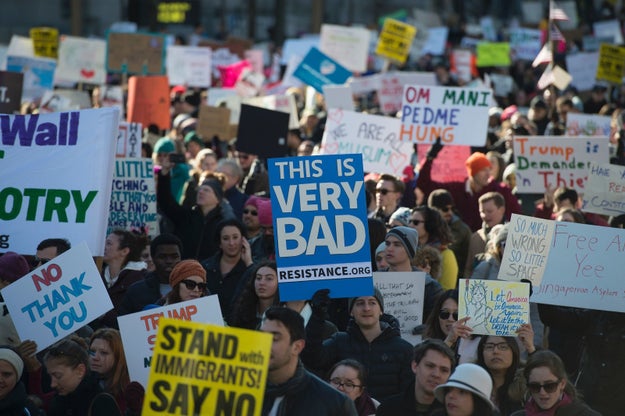 Last year, in March, a group of Bernie Sanders voters spent days phone-banking staffers’ cell phones, imploring the campaign to challenge the vote in four states because of speculation on social media about ballot irregularities.

By the end of the primary, staunch Sanders supporters at state conventions would sit through the proceedings with their phones raised, videotaping. “There was a film-everything, everything’s-rigged mentality,” said Matt Berg, a former Sanders aide.

Two weeks into Donald Trump’s presidency, the same flashes of alarm, paranoia, and genuine outrage from the Democratic Party’s most fervent progressives have helped give rise to the left’s own distinct brand of the online phenomenon known as fake news.

If it began during the election with ad revenue-hungry hoax sites and false information campaigns directed largely at Hillary Clinton, fake news in the Trump era has seeped into the liberal online ecosystem in the form of viral posts on Medium, Reddit, Twitter, and Facebook — with progressives elevating anonymous social media accounts, floating outlandish conspiracies, and seizing on stories that don’t hold up to the facts.

There are new cases daily. Suspicions about his 2020 reelection filing. Theories about the “regime’s” plan for a “coup d’état against the United States” (complete with Day After Tomorrow imagery of New York City buried in snow). Stories based on an unverified Twitter account offering supposed “secrets” from “rogue” White House staffers (followed by more than 650,000 people). Even theories about the Twitter account (“Russian disinformation”).

Since the election, the debunking website Snopes has monitored a growing list of fake news articles aimed at liberals, shooting down stories about a new law to charge protesters with terrorism, a plan to turn the USS Enterprise into a floating casino, and a claim that Vice President Mike Pence put himself through gay conversion therapy.

In a recent interview with the Atlantic, Snopes managing editor Brooke Binkowski described liberal fake news as largely “wish-fulfillment stuff.” More “Trump About to be Arrested,” she told the magazine, than misinformation and false attacks designed to go viral.

Jim Manley, a Democratic strategist and former senior aide to the retired Senate minority leader Harry Reid, put it another way: “Given how concerned people are about the state of the country, on the left there’s more and more of a twitchy finger, if you will.”

“Social media incentivizes these relatively fabricated, unsourced, or clickbaity kind of pieces of content because there’s already this baked in audience,” said Angelo Carusone, president of liberal group Media Matters. “Long term I don’t want to create a parallel universe here where the left is doing the same thing.”

Panicky liberal memes have cascaded across the internet in recent weeks, like an Instagram post regarding Steve Bannon’s powers on the National Security Council shared by a celebrity stylist and actress. Some trolls have even found success making fake news specifically aimed at tricking conservatives.

An analysis by BuzzFeed News found that in the last three months of the election, the top 20 fake political news stories saw more engagement on Facebook than the top 20 real election stories from 19 major outlets combined. A subsequent poll revealed that a majority of Americans who recalled seeing fake election news headlines believed them to be accurate.

Democratic operatives and staffers at left-leaning media outlets predict that viral, anti-Trump conspiracy theories will ultimately distract from real reporting about the administration, undermining legitimate causes for outrage on the left over what the Trump administration is actually doing.

Still, for now, it’s a conversation that exists almost entirely outside the political class itself. Elected officials are not hawking phony stories as true, like Trump’s calls to investigate widespread voter fraud during the election. But that remove poses its own problems for leaders with no obvious way to dismantle widely shared false stories.

“It exists on the left and that’s a problem because it misinforms people,” said Judd Legum, editor in chief of progressive news site ThinkProgress. “That’s harmful in other ways because the time you’re spending talking about that, you could spend talking about other stuff.”

“It contributes to a broader environment of distrust, and it sort of accelerates the post-factual nature of our times,” said Teddy Goff, co-founder of Precision Strategies and a former senior aide to Barack Obama and Hillary Clinton. “Fake news is pretty damaging no matter who it benefits politically. No one on the left should think we ought to be replicating the fake news tactics on the right.”

Berg, the Sanders staffer, recalled trying to reason during the campaign with diehard activists convinced the election had been rigged in Clinton’s favor. “It's hard to get people to question things and investigate and read a newspaper and stuff,” he said. “It’s going to be a challenge that will come up more and more for the progressive movement.”

Mark Longabaugh, a senior Sanders adviser, described supporters who’d turn a “nugget of fact” — the disqualified Sanders-supporting delegates at the Nevada state convention, for instance — into “fanciful ideas that we had in fact won elections that we hadn't.”

“It was best to ignore it,” Longabaugh added.

“It’s a complicated problem that cannot be solved by political parties or cause-based organizations on the left. It is certainly incumbent on everybody to try not to share that stuff and be a little more skeptical,” Goff said.

The online energy also raises questions about the party’s relationship with its base. In recent weeks, progressives have pressured lawmakers to adopt a tougher stance toward Trump and join ranks with the millions of protesters who marched over inauguration weekend.

The two top-ranking Democrats in Washington, Chuck Schumer in the Senate and Nancy Pelosi in the House, have both signaled an openness to working on legislation with Trump. Last week, protests formed outside Schumer’s home in Brooklyn. And among progressive activists online, Pelosi was met with vehement push-back after saying the party has a “responsibility to the American people to find our common ground.”

“Elected Democrats are stuck struggling to keep ahead of the anger that the base is feeling right now,” said Manley, the former Reid adviser. “It's very palpable.”