The creator of the four-days-old account, Mike, told BuzzFeed News he does not want to use his last name because he has yet to reveal himself to friends and coworkers.

“Every day for my job I put fake things on images and make them look as real as possible,” he said.

“I was watching the news and they were talking about executive orders for the past couple of days,” he said. “He kept holding up the signed executive order and he had this look on his face like he was so proud of what he just did.”

Mike went on to say that Trump looked like a kid who had drawn something who just wanted his parents to be proud him.

“He looks like a kid that, no matter how horrible the drawing may be, just wants his parents to say 'wow, you did such a great job.'”

The image Mike used is from Jan. 28, when Trump signed three executive orders including one calling for a plan to be delivered to him within 30 days on how to fight ISIS. 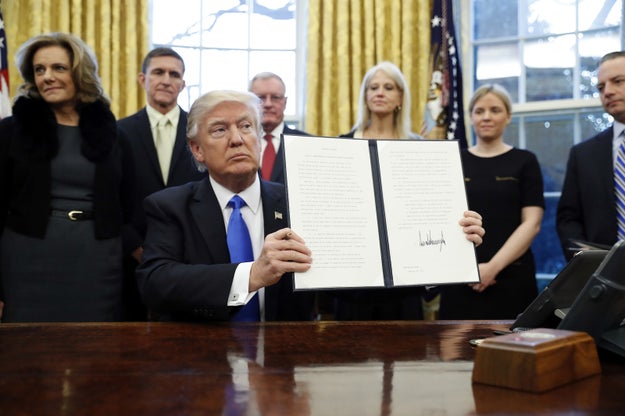 Mike insists that his tweets are not commentary on Trump and his policies — pointing to how his drawings are not a reflection of that. “I haven't drawn the wall, but I have drawn a flower, and a hand turkey,” he said.

“The more simple the drawing, the bigger the response is,” Mike said. “Simple drawings resonate with people — it's not political.”

“There's an inherent making fun of him drawing like a child — that's as far as I've taken in.”

Mike tweeted the account from his personal one thinking his friends would like it. By the next day he had 8,000 followers.

From there, the follower count kept growing. “The first day I got more than 100,000 followers,” Mike said. “Never in a million years did I think I'd get that kind of response.”