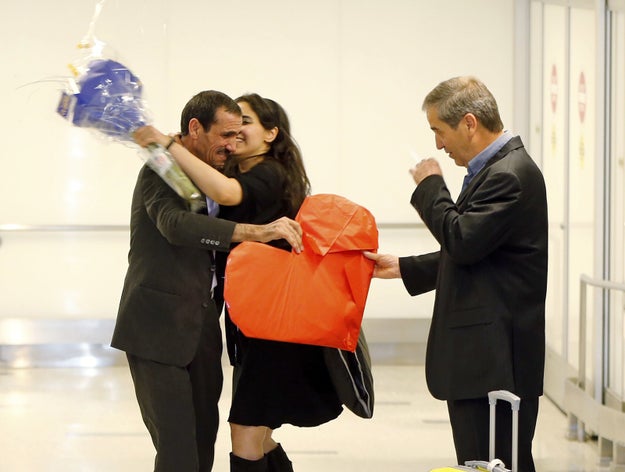 Ali Vayeghan, an Iranian citizen with a valid U.S. visa, left, is kissed by his niece Marjan Vayghan, at LAX on Feb. 2, 2017.

LOS ANGELES — Ali Vayeghan, an Iranian who had been granted legal US residency after 10 years, arrived at Los Angeles International Airport on Friday just as President Trump’s immigrant ban was being hastily enforced.

After 20 hours of detention, during which border agents allegedly told him to sign documents forsaking his legal status, Vayeghan was put on a plane and flown to Dubai.

He was just one of hundreds of legal residents who were caught up in the chaos of multiple federal agencies as border and customs agents scrambled to enforce a broadly-worded executive order at airports across the US that night.

But Vayeghan’s attorneys say his case was especially egregious because he was sent home before a federal judge could decide his individual case and just after a restraining order was issued blocking the immediate deportation of all legal residents who had already arrived.

On Thursday, Vayeghan arrived once again at LAX, only this time, he walked out into a packed Terminal 2 filled with applause, people singing “This Land Is Your Land,” and Los Angeles Mayor Eric Garcetti at his side. He was also the only foreigner kicked out of the US because of the executive order to be given permission to return, his attorneys said.

“This is humanity. This is what human rights looks like,” Vayeghan said through his niece, who interpreted. “[I am] shocked, humbled, and honored by it.”

The cascade of confusion started the night of Jan. 27, when Trump signed an executive order suspending the entire US refugee program for 120 days. People from the Muslim-majority nations of Syria, Iraq, Iran, Sudan, Somalia, Libya, and Yemen were also barred from entering the US for 90 days — refugees from Syria, indefinitely. 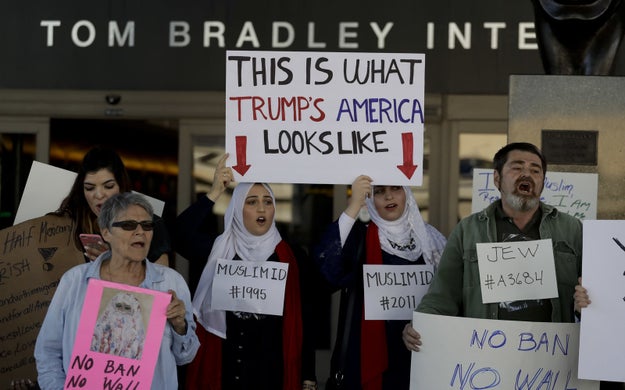 The sweeping action sparked widespread protests by those who argued the order was targeting Islam, rather than a bona fide threat.

Federal judges soon started nibbling around the edges, issuing orders preventing officials from deporting refugees and visa holders who had arrived just as the Trump directive was taking effect.

But the orders only added to the confusion over just how far the restrictions went, to whom exactly they applied, and how they should be enforced.

In Vayeghan’s case, his lawyers had to file a lawsuit making the case for his return. A federal judge ruled in his favor, finding that he demonstrated “a strong likelihood of success” in showing officials had violated his constitutional rights. However the ruling came down after he was forcibly put on a plane to Dubai.

Immigration rights attorneys believe there many others like Vayeghan, some sent back, some stuck at US customs checkpoints, who remain stranded by Trump’s order.

“There are hundreds of people out there who were removed, many of whom believe they have lost their chance to enter the United States,” Peter Bibring, an ACLU attorney who is representing Vayeghan, told BuzzFeed News. “We managed to get one person back, but there are so many more in this situation.”

“It’s an egregious use of power.”

Mohammad Abu Khadra, a high school student from Texas, remains at a refugee resettlement shelter in Chicago, despite having a visa.

The 16-year-old got caught up in Trump’s order when he returned to Houston International Airport on Saturday after visiting Jordan to renew his visa. He was detained for 48 hours, then transferred to Chicago, his attorney, Zakaria M Ali, told BuzzFeed News. He’s been at the refugee center, alone, and prevented from using his cell phone, since Monday.

“We’ve been trying to get him out of that facility and reunited with his brother, “ Ali said, adding that the teen could be in custody for as long as two months despite not meeting the definition of those banned under Trump’s order. 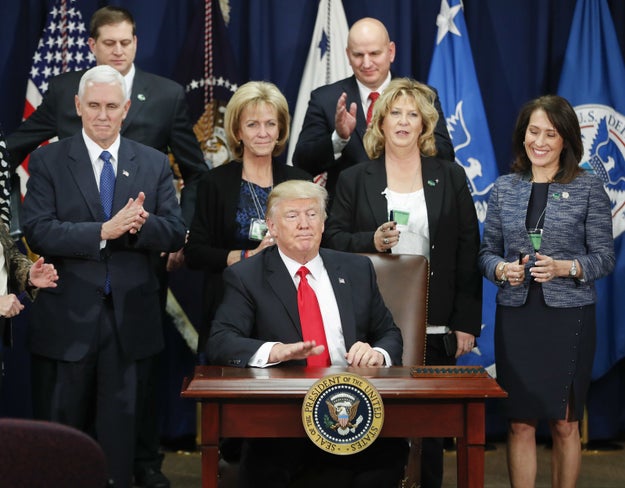 Part of the problem, legal advocates say, is that a vacuum of leadership at the Department of Homeland Security has given border patrol agents a lot of room in how they choose to enforce the broadly worded executive order.

“It’s an egregious use of power,” said Mitra Ebadolahi, Border Litigation Project staff attorney with the ACLU of San Diego. “[Customs and Border Protection] is looking the other way and allowing local officials to do their own thing.”

That has, in turn, frustrated immigration attorneys who say Customs and Border Patrol agents have illegally thwarted their efforts to reach detainees and provide counsel.

The ACLU is currently locked in a legal battle with the federal government to obtain a list of everyone who has been detained across the country. A US district judge ordered officials to turn it over days ago.

“We're finding out about people detained in airports because of luck — their relatives are talking. We don’t know if they have counsel, most do not,” said Lee Gelernt, an ACLU attorney fighting the ban. “The government is not telling us what's going on.” 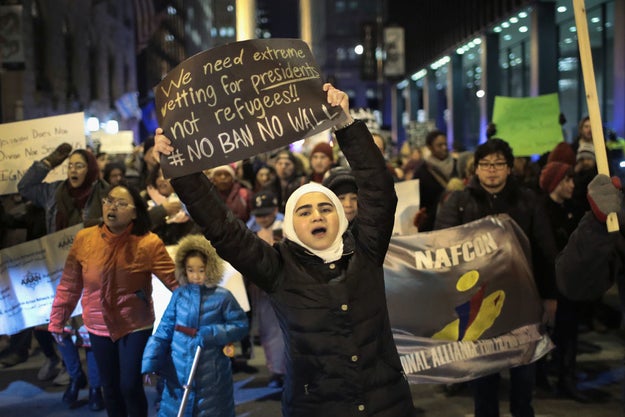 Talia Inlender, an attorney at pro-bono law firm Public Counsel, one of the first to advocate for Vayeghan at LAX, said she was stalled by CBP agents at every turn when she tried to talk to him.

They also accuse some agents of attempting to trick detainees into signing documents that would nullify their visas or legal residency status.

“For a border patrol officer to tell a legal, permanent resident, 'If you don't sign this we will detain you,' is outrageous,” said Angela Fernandez, executive director for the Northern Manhattan Immigration Coalition. “These people function as US citizens in every sense except they can’t vote.”

Customs and Border Patrol countered the accusations and said agents immediately began taking steps to comply with the orders issued by federal judges.

“We are committed to ensuring that all individuals affected by the Executive Orders, including those affected by the court orders, are being provided all rights afforded under the law,” CBP said in a statement. “We are and will continue enforcing President Trump’s Executive Order humanely and with professionalism. We are and will remain in compliance with judicial orders.”

However, the Department of Homeland Security Office of Inspector General announced that it is reviewing the agency’s implementation of the executive order, adherence to the court orders, and allegations of misconduct. 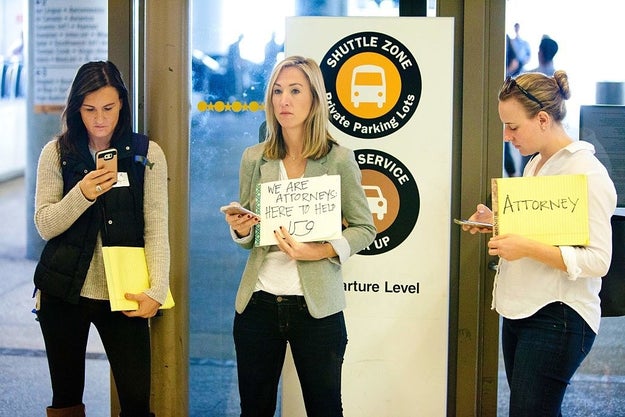 After several days of White House officials attempting to clarify the scope and intent of the immigration order, the Trump administration on Thursday also issued “authoritative guidance,” saying the ban did not apply to green card holders, or lawful permanent residents.

But that guidance only came after days of conflicting messages from the White House and Department of Homeland Security about who was affected by the order. And immigration attorneys and advocacy groups say officials are still targeting green card holders and legal residents. There were also reports of green card holders being detained at US customs checkpoints for flight to and from the US. 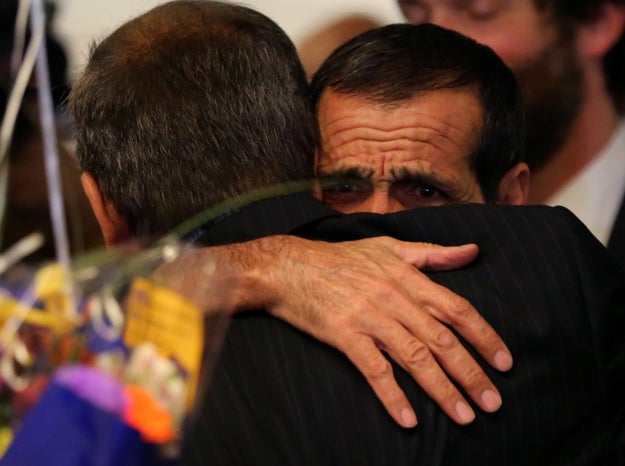 Ali Vayeghan hugs his brother Hossein as he arrives at LAX on Feb. 2, 2017.

As the fanfare for Vayeghan’s legal victory and return home at LAX subsided, an airport police officer returned his passport. On one page, the word “REVOKED” in red marker covered a photo of his face, on the other page, a stamp of entry, cementing his legal status in the US.

His brother, Hossein, let out a sigh of relief.

LINK: These Refugee Grandparents Were Finally Allowed To Flee Ukraine — Then Trump’s Order Stopped Them