Merrick Garland Has A Higher "Scalia Score" Than Neil Gorsuch

Merrick Garland Has A Higher "Scalia Score" Than Neil Gorsuch 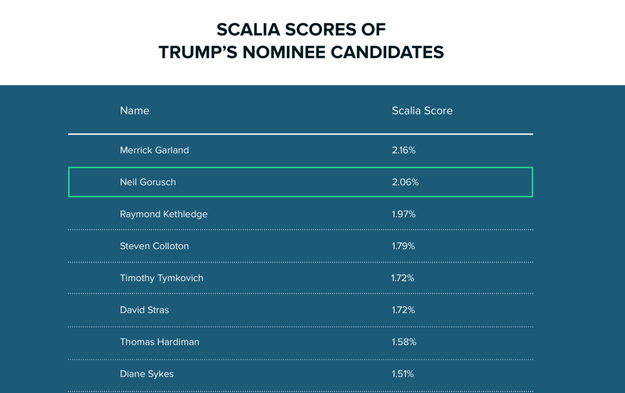 Neil Gorsuch, the judge President Trump selected to fill the vacancy on the Supreme Court created after the death of Justice Antonin Scalia, has often been compared, in style and philosophy, to the judge he's been nominated to replace. But there's another prominent federal appeals court judge that, according to data analysis of case law citations, fits the Scalia mold even more snugly: Merrick Garland.

Garland, the judge tapped by President Obama 50 weeks ago to join the Supreme Court but whom Senate Republicans refused to consider, has cited Justice Scalia in his opinions more often than Trump's pick, as a percentage of their total citations, according to the legal search and analytics company Ravel.

The “Scalia Score,” Ravel's cofounder and COO Nick Reed told BuzzFeed News, takes the number of times a judge cites opinions authored by Scalia and then divides them by the number of their total citations. Garland cited Scalia 2.16% of the time — slightly more than Gorsuch, who referenced Scalia in 2.06% of his citations. Gorsuch also had fewer citations than Garland; in his career, he's made 7,972 of them, while Garland's had 10,665, according to Ravel.

Reed noted that Garland sits on the DC Circuit, the same court that Scalia sat on before he became a Supreme Court Justice. “If you're a DC Circuit judge, Scalia also wrote a lot of precedential case law that applies directly in your circuit.” Reed said. “Merrick just had more Scalia arguments to draw from.”

Ravel calculated Scalia scores for all 21 judges that Trump listed as his potential Supreme Court nominees. Gorsuch bested them all, which Ravel noted in a blog is an indication of his “ideology and conservative bonafides.”

“Of all of Trump's picks, Gorsuch is the most like Scalia in the citation index, but Merrick Garland was even closer,” Reed said. “That's something Republicans can chew on.”

After Scalia's death last year, Ravel ran a series of calculations to reveal his influence in American legal thought. One of the insights gleaned from the data was that out of all active and inactive Supreme Court justices, Ruth Bader Ginsburg had the 6th most similar citation pattern compared to Scalia. Justice William Rehnquist took the top spot.