National Front politicians appear to be working with a large international network of internet trolls to manipulate French social media.

Last month BuzzFeed News was briefly given access a chatroom called “The Great Liberation of France,” which is hosted on a Slack-like messaging platform called Discord.

“The Great Liberation of France” and its French-language equivalent “La Taverne des Patriotes” are hotbeds of far-right activity in France. You can see their influence all across the internet.

For instance, in a recent thread called “#MFGA General” — or “Make France Great Again” — on 4chan’s /pol/ message board, users were making jokes about a music genre called “vaporwave” and discussing whether they should spread a version called “Marinewave” named after Marine Le Pen, the leader of the National Front.

But that image actually originated in “La Taverne des Patriotes,” which was created by a user named Chepamec, a pro-FN Discord user who also moderates of the r/Le_Pen Reddit community. 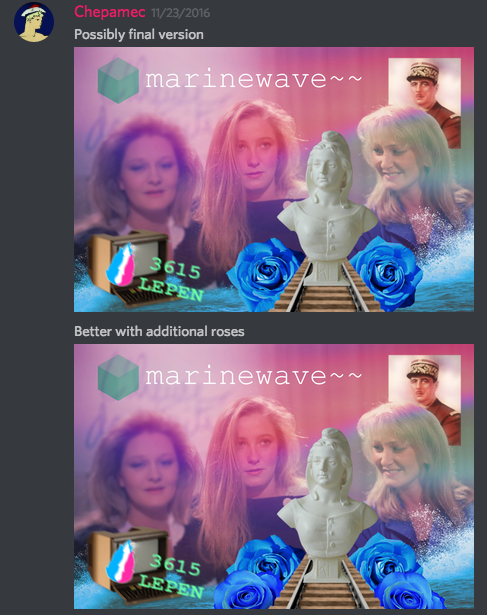