The US Just "Officially" Put Iran "On Notice" — Whatever That Means

The US Just "Officially" Put Iran "On Notice" — Whatever That Means 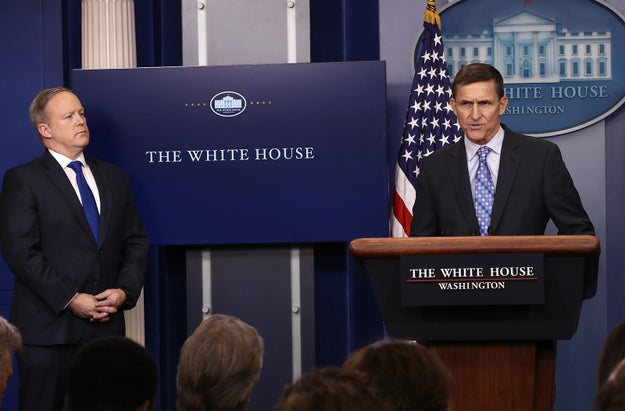 Iran, Flynn said, had conducted a missile test over the weekend, in alleged violation of UN Security Council Resolution 2231. An attack by loosely Iranian-allied Houthi rebels in Yemen on a Saudi military ship had also taken place, Flynn said, and the US was paying attention.

“President Trump has severely criticized the various agreements reached between Iran and the Obama Administration, as well as the United Nations – as being weak and ineffective,” Flynn said. “Instead of being thankful to the United States for these agreements, Iran is now feeling emboldened.”

“As of today, we are officially putting Iran on notice,” he concluded, then walked off without taking questions.

It was a bold declaration but also one that left people in the capital scratching their heads about what precisely he meant.

Flynn's statement was met with surprise among officers at the Pentagon, where officials were not prepared to respond to Flynn's brief statement. Secretary of Defense Jim Mattis, who was en route to Asia when Flynn appeared at the White House podium, had reviewed the statement beforehand. (The Guardian reported that he actually toned it down before Flynn's delivery.)

But the Joint Chiefs of Staff had no immediate comment. The State Department forwarded all questions to the White House.

The administration's stance towards Iran has been under discussion, though, even if Flynn's hardline stance was unexpected. On its Twitter account, US Central Command retweeted a message from the previous day from Nikki Haley, the US ambassador to the United Nations, that included similar language. “The US is calling Iran out and will respond accordingly,” the screen shotted statement read, with the hashtags #USUNStrong #TakingNames added.

“We saw the statement as well,” CENTCOM said in a statement after Flynn's appearance provided to BuzzFeed News. “This is still at the policy level, and we are waiting for something to come down the line. We have not been asked to change anything operationally in the region.”

“The US military has not changed its posture in response to Iranian missile tests,” Christopher Sherwood, a Pentagon spokesman, told reporters on Wednesday.

Meanwhile, in Iran, a leading Iranian official was defiant about the medium-range missile test. “Iran does not need a permission from any country or international organization to develop its conventional defense capability,” secretary of Iran's Supreme National Security Council Ali Shamkhani said at a meeting with the Armenian defense minister, according to the official IRNA news agency.

“It will confront any interferences in affairs related to its defense power, including its missile capability,” Shamkhani said, just hours before Flynn's warning.

Earlier on Wednesday, 220 Iranian lawmakers signed a statement insisting on Iran's right to develop what they called conventional deterrent capabilities. “The opposition of some countries to this might not be logical and missile test-fires do not contradict any UN Security Council resolution,” the semi-official Fars news agency quoted the lawmakers as saying.

“The recent test-fire was in line with our program and we will not allow any outsider to intervene in our defense,” Iran's defense minister Hossein Dehqan was quoted as saying by the Tasnim news agency. He was the first Iranian official who confirmed the launch had taken place.

In a briefing that Flynn alluded to earlier in the day, which was plagued with technical difficulties, a senior administration official told reporters that the warning came because “we are concerned about a range of destabilizing activities.” They noted that the Iran deal “does not address the majority of issues we are concerned about,” including Iran's undermining of governments and sponsorship of terrorism.

Obama administration officials told members of Congress soon after the deal was signed that those issues were left out to focus specifically on the issue at hand: Iran's nuclear program.

“Our focus is on reestablishing security and a pathway to prosperity and stability to more areas of the Middle East,” the official said.

But while some were wondering how the administration could make such a bold statement with little or no input from the military, some in uniform noted that administrations drawing red lines without notifying the military was not new. In 2012, President Obama declared a “red line,” and threatened to use force if the Syrian regime used chemical weapons on its people.

The president made the declaration in a statement that equally caught the Pentagon by surprise.