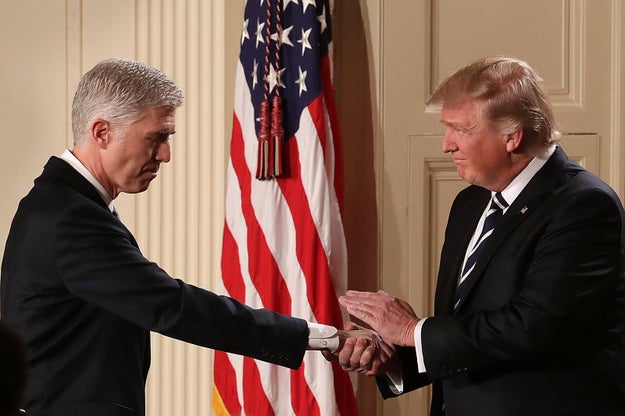 WASHINGTON — The Supreme Court is one step closer to a full-nine person bench.

With the possible addition of Neil Gorsuch — a federal appeals court judge nominated by President Trump Tuesday night to fill the vacancy left after the death Antonin Scalia — to its ranks, the Supreme Court could soon consider important cases involving cellphone location data and Americans' expectations of privacy.

The Fourth Amendment In The Digital Age

Invisible, silent, and almost always by your side, the signals sent and received from your phone can tell a faithful story of your life, perhaps most intimately about all the places you've been. As courts around the country wrestle with the privacy implications of always-on data collection, experts tell BuzzFeed News that the Supreme Court in the coming years is primed to grapple with the uncertainty around phone location data and the Fourth Amendment.

The Fourth Amendment prohibits unreasonable searches and seizures. But Goitein and other experts point to what's known as the third party doctrine of the Fourth Amendment, which holds that people give up their expectation of privacy when they share information with third parties, like banks or telephone companies.

“That doctrine simply doesn't work in the digital era, in which you can't go 24 hours without sharing highly sensitive information with third parties,” she said.

Several appeals courts have used the third party doctrine in decisions against defendants in which their phone location information was obtained by law enforcement without a warrant.

“It's impossible to go about your daily life in the digital age without leaving a trail of digital breadcrumbs behind you that can reveal some of the most private aspects of your life — even though you never intended to reveal them,” Nathan Freed Wessler, a staff attorney with the American Civil Liberties Union, told BuzzFeed News.

While establishing probable cause is the legal threshold to obtain a warrant, many jurisdictions allow law enforcement to satisfy a lower standard, known as reasonable suspicion, if they request a person's cellphone location information from a mobile provider. Wessler said that the uneven standard creates a patchwork of laws where citizens have fewer protections depending on what state they live in. The Supreme Court, he said, could provide much needed clarity.

In fact, lawyers involved in cellphone location cases in the 4th and 6th Circuits have petitioned the Supreme Court to rule on the issue. Experts say that the high court is likely to review such a case — because of the uncertainty in the federal court system and the national importance of defining privacy rights as technology increasingly shapes our lives.

Others see encryption on the Court's horizon. While Apple and the Justice Department were poised for a high-stakes courtroom showdown last year, over an encrypted iPhone, the FBI was able to get into the device without Apple's help, ending the case, but leaving the larger question of lawful access unresolved.

“We will see technical assistance to decrypt communications or facilitate access find its way to the Court,” Albert Gidari, the director of privacy at Stanford’s Center for Internet and Society, told BuzzFeed News. “Trump spoke to this issue during the campaign, and I think there are a number of cases in the works for the Department of Justice that would be good candidates.”

President Donald Trump announced Neil Gorsuch as his nominee for the Supreme Court Tuesday evening, and said the “image and genius” of the late Justice Antonin Scalia “was in my mind throughout the decision making process.” During his acceptance speech, Gorsuch, who still awaits confirmation by the Senate, offered a window into his judicial thinking.

“I respect … the fact that in our legal order it is for Congress and not the courts to write new laws.” Gorsich said in his acceptance speech. “It is the role of judges to apply, not alter, the work of the people's representatives.”

If Gorsuch is confirmed by the Senate, how might a new justice, in the mold of Scalia, rule on Fourth Amendment cases?

“Judicial decisions on Fourth Amendment rights in the digital age do not break down cleanly along ideological lines,” Wessler said. For instance, in recent years the Court has ruled unanimously in favor of requiring warrants for searches of cell phones and for the GPS tracking of cars. And in 2001, Justice Scalia wrote an opinion requiring police to obtain a warrant before surveilling a home using a thermal-imaging camera. To allow the search without a warrant, he wrote, would “permit police technology to erode the privacy guaranteed by the Fourth Amendment.”

“The framers were not concerned about the internet — that's one way to look at it,” Blake Reid, the director of the Technology Law & Policy Clinic at the University of Colorado told BuzzFeed News. Another approach, he said, could focus on the Fourth Amendment's protections of people's “papers and homes” with an eye on the new ways that police can surveil a person's residence.

While it remains unclear what cases the Court may consider, Goitein said the shifting politics of the Trump era gives urgency to these Fourth Amendment cases. “The privacy threat gets more acute in the atmosphere we have right now, where I think there are those who view the results of the election as a mandate for law enforcement to get tougher than ever.”