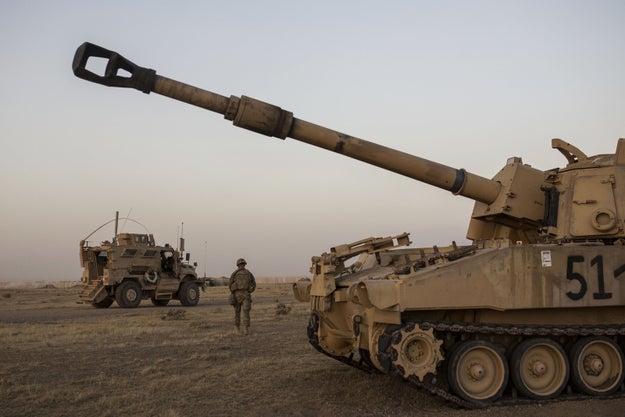 WASHINGTON — The Pentagon Inspector General is expected to release a report Wednesday concluding US Central Command’s downplaying of the rise of ISIS was not part of a systematic intelligence problem but rather a series of procedural problems in how that intelligence is filtered, two US officials told BuzzFeed News.

Analysts who risked their jobs and demanded an investigation into how senior commanders treated their intelligence analysis already are outraged. One called the report a “whitewash.” Others said the report would do little to stop the growing threat of politicized intelligence reports, which has haunted the US leading up to the 2003 Iraq invasion.

“Some will see it as a slap on the wrist,” one US official who reviewed the report told BuzzFeed News.

Trump administration critics fear an increasingly politicized intelligence process, particularly as the new he repeatedly criticized the intelligence community during the transition period. Some within Central Command, which is carrying out the ongoing fight against ISIS in Iraq and Syria, had hoped the IG report would provide a roadmap to mitigate that threat.

The highly-anticipated report, which is hundreds of pages long, will include a series of recommendations for CENTCOM, the officials said. It is unclear how much of the report will be publicly released.

In their allegations, the analysts described a persistent effort by leaders of CENTCOM’s intelligence directorate, or J2, to downplay or even change reports that questioned the effectiveness of the US-led coalition campaign against ISIS.

The Inspector General’s report is one of two major investigations into the J2's actions. In August 2015, a House of Representatives task force commissioned after the analysts' allegations became public concluded that the leadership had indeed watered down lower level assessments in an effort to validate the Obama administration’s narrative on the status of the war.

Among those who lead that task force was then-Rep. Mike Pompeo, who now serves as CIA director.

The IG report will be far more extensive in its investigation and recommendations than the task force, the officials said, but also far less critical.

“After months of investigation, this much is very clear: from the middle of 2014 to the middle of 2015, the United States Central Command’s most senior intelligence leaders manipulated the command’s intelligence products to downplay the threat from ISIS in Iraq,” Pompeo said at the time. “The result: consumers of those intelligence products were provided a consistently ‘rosy’ view of U.S. operational success against ISIS. That may well have resulted in putting American troops at risk as policymakers relied on this intelligence when formulating policy and allocating resources for the fight. I urge the Department of Defense Inspector General to hold accountable the intelligence leaders that failed our service members fighting our wars on the ground.”

Democratic members of the task force agreed with some of their Republican counterparts’ assessments, notably that CENTCOM did not create room for dissenting views on the ISIS and al-Qaeda threat.

US Central Command was allowed to review the report weeks earlier, in part, to review for factual errors, the officials said. It now has the full report. CENTCOM spokesman Air Force Col. John Thomas declined to comment.

CENTCOM was one of many agencies delivering intelligence about ISIS and al-Qaeda. Other government agencies provided a more sanguine assessment.

By July 2015, more than 50 analysts asked the DIA Inspector General to conduct an investigation, alleging that their assessments were altered by higher level commanders to dilute their assessments.

That so many signed a letter demanding an investigation amounted to an insurrection within the J2 at the height of the war against ISIS in Iraq and Syria. Only a year earlier, ISIS took control of Mosul, Iraq’s second-largest city.

Iraqi forces, with the aide of a US-led airstrike campaign and advisers are the ground, now are battling ISIS for control of the city. So far, ISIS has lost the eastern half of the city. The more populated western half remains under ISIS control.