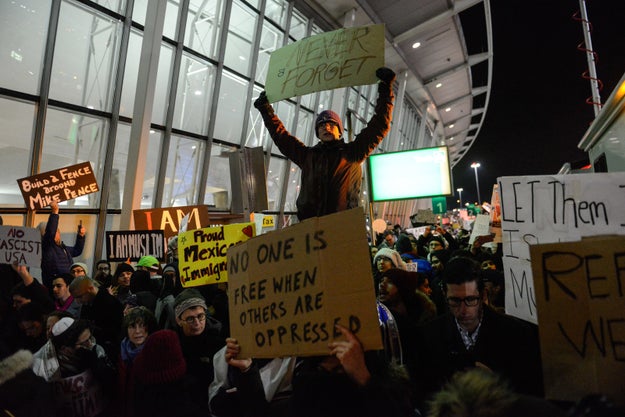 Hundreds of people tweeted they are deleting their Uber accounts Saturday amid accusations the company took part in taxi cab strike-breaking in New York during a protests against President Trump's refugee ban.

Cabbies affiliated with the New York Taxi Workers Alliance refused to pick up passengers at New York's JFK airport for an hour Saturday in solidarity with those protesting President Trump's executive order banning refugees and limiting immigration from Muslim-majority countries.

They also sent out calls on social media for Uber and Lyft drivers to join in their show of support for the protests at Terminal 4. The city's taxi drivers are a disproportionately Muslim and immigrant workforce, and many drive for apps in addition to independent for-hire work.

Shortly after the designated strike time of 6 p.m. to 7 p.m., Uber sent a tweet telling customers surge pricing had been suspended.

Since surge pricing increases the cost for passengers when demand is high, suspending it looked to some like an active undermining of the NYTWA's strike. Uber told BuzzFeed News it was aware of the hour of solidarity, which its drivers were free to participate in, and the official strike hour had technically ended 36 minutes prior.

One popular Weird Twitter denizen, @Bro_Pair, tweeted out the following about an hour later.

Others repeated the claim that Uber had actively broken the strike, with some re-posting the full statement from the NYTWA in support of the protests.

“We're sorry for any confusion about our earlier tweet — it was not meant to break up any strike,” Uber said in a statement to BuzzFeed News. “We wanted people to know they could use Uber to get to and from JFK at normal prices, especially tonight.”

Uber said the tweet about the suspension of surge pricing was intended to alert customers that Uber was a service available at regular, rather than inflated, cost. Uber has received criticism in the past for implementing higher prices during high-traffic times — and for ways its surge pricing affects worker organizing.

In the message, he said Uber's “People Ops team” had already reached out to the “dozen or so employees who we know are affected” and that the company was “working out a process” to compensate drivers during the next three months to “help mitigate some of the financial stress and complications with supporting their families and putting food on the table.”

Uber maintains that drivers are independent contractors, rather than company employees, a classification that is currently being disputed in a number of courts around the country.

Kalanick also said in the email he would “raise the issue” that the ban “will impact many innocent people” when he attends Trump's first business advisory group meeting in the coming days.

Some tweeted that Kalanick's presence on that advisory group contributed to their decision to delete the Uber app.

For others, it was both the alleged strike-breaking and the cooperation with the Trump administration.

Yesterday President Trump signed an executive order suspending entry of citizens from seven countries—Iran, Iraq, Libya, Somalia, Sudan, Syria and Yemen—to the United States for at least the next 90 days.

Our People Ops team has already reached out to the dozen or so employees who we know are affected: for example, those who live and work in the U.S., are legal residents but not naturalized citizens will not be able to get back into the country if they are traveling outside of the U.S. now or anytime in the next 90 days. Anyone who believes that this order could impact them should contact immigration@uber.com immediately.

This order has far broader implications as it also affects thousands of drivers who use Uber and come from the listed countries, many of whom take long breaks to go back home to see their extended family. These drivers currently outside of the U.S. will not be able to get back into the country for 90 days. That means they will not be able to earn a living and support their families—and of course they will be separated from their loved ones during that time.

We are working out a process to identify these drivers and compensate them pro bono during the next three months to help mitigate some of the financial stress and complications with supporting their families and putting food on the table. We will have more details on this in the coming days.

While every government has their own immigration controls, allowing people from all around the world to come here and make America their home has largely been the U.S.’s policy since its founding. That means this ban will impact many innocent people—an issue that I will raise this coming Friday when I go to Washington for President Trump’s first business advisory group meeting.

Ever since Uber’s founding we’ve had to work with governments and politicians of all political persuasions across hundreds of cities and dozens of countries. Though we share common ground with many of them, we have had areas of disagreement with each of them. In some cases we’ve had to stand and fight to make progress, other times we’ve been able to effect change from within through persuasion and argument.

But whatever the city or country—from the U.S. and Mexico to China and Malaysia—we’ve taken the view that in order to serve cities you need to give their citizens a voice, a seat at the table. We partner around the world optimistically in the belief that by speaking up and engaging we can make a difference. Our experience is that not doing so shortchanges cities and the people who live in them. This is why I agreed in early December to join President Trump’s economic advisory group along with Elon Musk (CEO of Tesla), Mary Barra (Chairwoman/CEO of General Motors), Indra Nooyi (Chairwoman/CEO of Pepsi), Ginni Rometty (Chairwoman/CEO of IBM), Bob Iger (Chairman/CEO of Disney), Jack Welch (former Chairman of GE) and a dozen other business leaders.

I understand that many people internally and externally may not agree with that decision, and that’s OK. It's the magic of living in America that people are free to disagree. But whatever your view please know that I’ve always believed in principled confrontation and just change; and have never shied away (maybe to my detriment) from fighting for what’s right.

Are you struggling to keep your audience interested and engaged? Maybe you need to mix up your content marketing strategy!...
Read
How to's

The average American spends 24 hours online each week. That’s a lot of web browsing.By now, the internet is a...
Read
How to's

Cybersecurity continues to be a high-profile concern both for businesses and individuals. With more people working at home and using...
Read more

For any queries, please email us at techfeatured.com@gmail.com

Are you struggling to keep your audience interested and engaged? Maybe you need to mix up your content marketing strategy! By creating eye-catching, engaging...
Read more

The average American spends 24 hours online each week. That’s a lot of web browsing.By now, the internet is a way of life. We...
Read more

Want to stay up to date with the latest news?

We would love to hear from you! Please fill in your details and we will stay in touch. It's that simple!

For any queries or guest posts please contact us at techfeatured.com@gmail.com

Are you struggling to keep your audience interested and engaged? Maybe you need to mix up your content marketing strategy! By creating eye-catching, engaging...
Read more

The average American spends 24 hours online each week. That’s a lot of web browsing.By now, the internet is a way of life. We...
Read more

Dave’s Killer Bread OR Ezekiel Bread, Which Is Better for You?

Has this happened to you? You got connected with a health and fitness guru and have been following their prescriptions to a better life....
Read more

Why a Steel Chastity Belt is Best For Male Chastity

A stainless steel chastity belt is probably the ultimate male chastity device you can get, and for several reasons.Before I get into that though,...
Read more