Austin-based startup TrackingPoint released a new kind of rifle with auto-aim feature.TrackingPoint makes “Precision Guided Firearms, or “PGFs,” which are a series of three heavily customized hunting rifles, ranging from a .300 Winchester Magnum with a 22-inch barrel up to a .338 Lapua Magnum with 27-inch barrel, all fitted with advanced computerized scopes that look like something directly out of The Terminator. Indeed, the comparison to that movie is somewhat apt, because looking through the scope of a Precision Guided Firearm presents you with a collection of data points and numbers, all designed to get a bullet directly from point A to point B.

The PGF isn’t just a fancy scope on top of a rifle. All together, the PGF is made up of a firearm, a modified trigger mechanism with variable weighting, the computerized digital tracking scope, and hand-loaded match grade rounds (which you need to purchase from TrackingPoint). This is a little like selling both the razor and the razor blades, but the rounds must be manufactured to tight tolerances since precise guidance of a round to a target by the rifle’s computer requires that the round perform within known boundaries.

The image displayed on the scope isn’t a direct visual, but rather a video image taken through the scope’s objective lens. The Linux-powered scope produces a display that looks something like the heads-up display you’d see sitting in the cockpit of a fighter jet, showing the weapon’s compass orientation, cant, and incline. To shoot at something, you first “mark” it using a button near the trigger. Marking a target illuminates it with the tracking scope’s built-in laser, and the target gains a pip in the scope’s display. When a target is marked, the tracking scope takes into account the range of the target, the ambient temperature and humidity, the age of the barrel, and a whole boatload of other parameters. It quickly reorients the display so the crosshairs in the center accurately show where the round will go.

Image recognition routines keep the pip stuck to the marked target in the scope’s field of view, and at that point, you squeeze the trigger. This doesn’t fire the weapon; rather, the reticle goes from blue to red, and while keeping the trigger held down, you position the reticle over the marked target’s pip. As soon as they coincide, the rifle fires.

Putting lead accurately on targets is only part of what TrackingPoint’s PGF system does. The computerized tracking scope contains some amount of nonvolatile storage, and like an airplane’s “black box,” it’s constantly recording the visual feed from the optics. It also contains a small Wi-Fi server, and TrackingPoint offers an iOS app that connects to the scope via an ad-hoc Wi-Fi network and streams the scope’s display to the app, allowing someone with an iPad or iPhone to act as a spotter. TrackingPoint notes that for novice hunters, having the ability to duplicate the scope’s picture onto an external display makes it a lot easier for an experienced spotter to give advice on how and when to shoot. 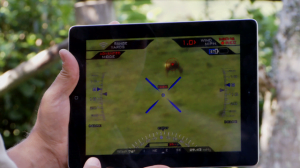 the scope’s video recordings can be uploaded to video sharing sites like YouTube. Rather than bragging to buddies about that amazing 1000-yard shot you took at the range or out in the field last week, you can simply show them, complete with all the heads-up display data about conditions and range.