Building a full-sized, ion-powered version of the Enterprise complete with 1G of gravity on board, and says it could be done with current technology, within 20 years. “We have the technological reach to build the first generation of the spaceship known as the USS Enterprise – so let’s do it,”

This “Gen1” Enterprise could get to Mars in ninety days, to the Moon in three, and “could hop from planet to planet dropping off robotic probes of all sorts en masse – rovers, special-built planes, and satellites.” 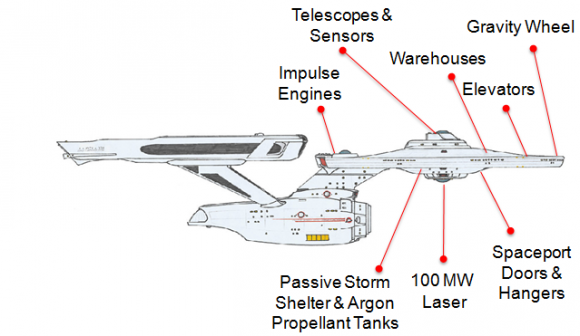 Complete with conceptual designs, ship specs, a funding schedule, and almost every other imaginable detail, the website was launched just this week and covers almost every aspect of how the project could be done. This Enterprise would be built entirely in space, have a rotating gravity section inside of the saucer, and be similar in size with the same look as the USS Enterprise that we know from Star Trek.

The Gen1 USS Enterprise is a huge ship. At .6 miles in length it’s bigger than any craft or building ever constructed.  It’s nearly three times as long as the largest US aircraft carrier, and its length is greater than the tallest building in the world.

Why is it so big? First, it must house a gravity wheel that is large enough in diameter so that people are comfortable inside of it and the behavior of gravity to them seems reasonably earthlike. Second, the Enterprise is a combination of spaceship, space station, and spaceport. This means it must support having many people on board at once – up to a thousand at any given time. It must be able to dock and refuel multiple smaller spacecrafts at the same time. And the huge cargo-carrying capacity is critical for hauling probes, landers, and base-building equipment to Mars and elsewhere. Simply put, if we want to get serious about establishing a permanent human presence in space, with robust and sustainable capabilities to do big things up there, we need a big ship.