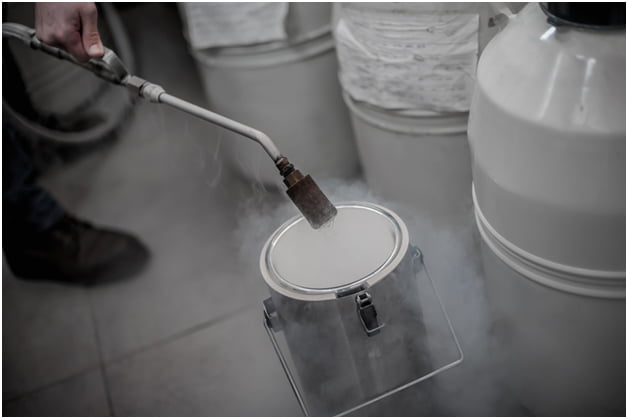 Cryogenics are utilized in a number of industries ranging from medicine to automotive manufacture to space exploration. The process of cryogenics involves extreme temperature changes, which puts great deals of pressure on seals. Depending on the intended use, different materials work best for gasket seals and other substances subjected to cryogenic processes. To serve their intended purposes, these sealing components must remain effective in the face of temperature extremes. When these substances or seals fail, the results can be catastrophic or even tragic.

In 1848, Thompson observed that materials where motion at a molecular level had come to a halt would exist in a state of complete absence of temperature or heat, which he called absolute zero. On the Kelvin scale, absolute zero is designated as 0 K with no degree sign, which is equivalent to -273 degrees Celsius. Other temperatures can be converted from Celsius to Kelvin by adding 273.

Slowing down or ceasing of molecular activity reduces electrical resistance, which in turn results in less wasted heat energy. This property is known as superconductivity. Superconductivity is used in producing magnets for magnetic resonance imaging (MRI) systems, which are widely used in hospitals.

Liquefied Natural Gas (LNG) is produced by cooling natural gas to a temperature of =162 degrees Celsius. LNG is a very efficient fuel that burns cleaner than gasoline or diesel fuel. Recommended uses for LNG fuel include long-haul trucking, heavy rail, off-road vehicles and in marine vessels.

Cryogenics also causes materials to contract, which makes it possible to place them in spaces where they would otherwise not fit. When the temperature around the material warms, the material expands to fill the space. One common use for this property is for solid rocket fuel tanks. In rocket propulsion, when the fuel inside the tank heats up, it expands and is forced out of the bottom, which propels the rocket forward, much like the air escaping from a balloon.

Reliable, high-quality products and materials are essential to cryogenics production. The results of failure can result in extensive losses and even the loss of human life. In 2018, a fertility clinic in San Francisco reported that the failure of liquid nitrogen in one of its storage tanks resulted in possible damage to hundreds of embryos.

The Challenger disaster of January 1986, which killed seven astronauts, is widely attributed to the failure of a rubber o-ring which had not been tested in extreme cold. The o-ring became stiff and failed to sufficiently seal one of the joints. Hot fuel then escaped from the fuel tank, rupturing the shell and causing the spacecraft to explode.

Cryogenics in the 21st Century

Although the principles associated with cryogenics were discovered in the 19th century, the properties of cryogenics continue to drive research and innovation today. Industries ranging from medicine to long-haul transport to space exploration utilize one or more principles of cryogenics. LNG, rocket propulsion and specialty gases are especially dependent on cryogenics. The failure of cryogenics can be disastrous, even fatal. Using the highest-quality materials for processes involving cryogenics is essential in minimizing the risk of such failures.