The 6 Items In Everyone's Home Wardrobe

The 6 Items In Everyone's Home Wardrobe

Whether or not you intended to create it, you probably have a home wardrobe. 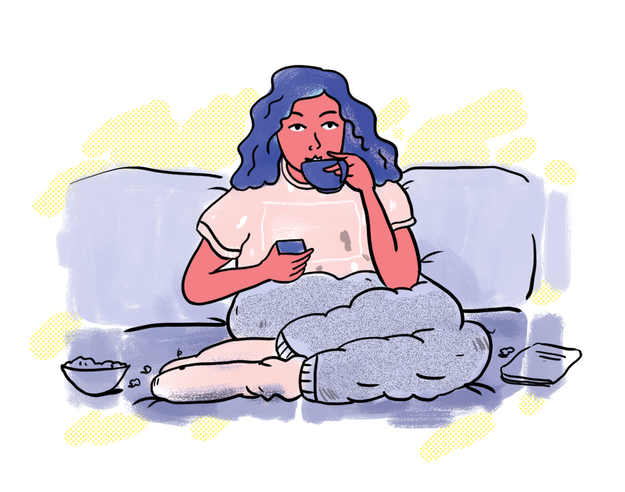 You know what I'm talking about. It’s the collection of clothes that you exclusively wear inside your house for things like cooking, cleaning, or lounging, and usually with no one else around to bear witness to their existence. They’re not technically pajamas, but that doesn’t mean you wouldn’t (or haven’t) worn them to bed. These items were accumulated not through a conscious aesthetic-building excursion, but instead, by chance and accident. Here, a sampling of the stars of your highly-curated, elite group of house clothes: 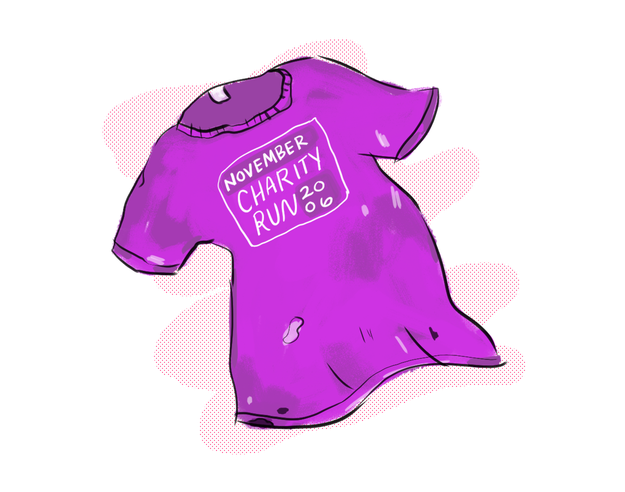 Definitely so threadbare that it looks translucent when held up to the light. Preferably emblazoned with the logo of a charity fun run you participated in against your will during Thanksgiving weekend 2006. The neckline is so stretched out it looks agape, probably at how long you’ve managed to make such a cheaply-made cotton tee last.

When you first got the T-shirt, you thought, “Oh, ok, this’ll be good to sleep in.” Sleep turned into lounging, which turned into cleaning, which turned into, “I just got home from work, better rip those muggle clothes off and put on the T-shirt for the next 12 hours.” Usually paired with the $50 workout pants you never wear to work out in (more on those later), the T-shirt is the centerpiece of your home wardrobe. It’s seen you through closet cleaning purges, regular toothpaste drippings, and the entire five seasons of Breaking Bad.

There’s a small hole near the hem on the right side, one you try mightily to ignore when it reminds you of the shirt's — and your own — mortality.

The too-comfy-to-be-real pair of sweatpants. 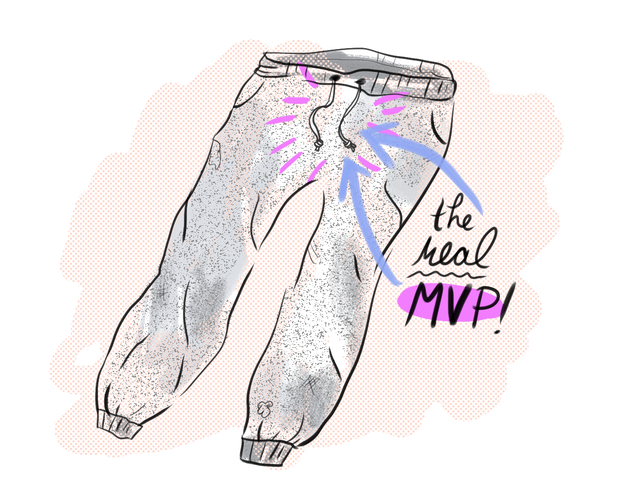 Like most pairs of sweatpants, you’re not exactly sure how you acquired them; they basically willed themselves into existence so that they could cup your butt cheeks and hug your legs as you become one with the couch. Not only are they versatile — wear them to do laundry! wear them with just a sports bra! wear them with absolutely nothing else! — but they conveniently have that drawstring that can keep you entertained for hours as you make long phone calls or wait for your slice ‘n bake cookies to come out of the oven. The sweatpants may be your starting forward, but the drawstring is the real MVP. 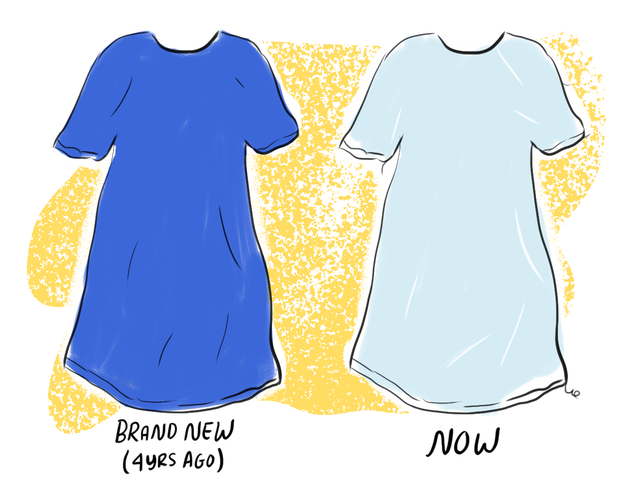 The concept of a house dress is nothing new, and its appeal will never fade. Any member of a home capsule wardrobe must be loose and forgiving, and no item fits that bill better than the dress — although the house shirt and the house flannel are equally deserving of that status if you don't wear or own dresses. You slip it on whenever you want to feel completely unencumbered, and wearing it makes you feel just a little more fancy than the T-shirt or the sweatpants.

The crucial characteristic of a house dress is that it wasn’t always worn exclusively at home. Like your mother, it had a life of its own before it became an integral part of yours. At one point, you wore it in public — it was your go-to “I don’t feel like picking out what to wear, so I’ll throw this on and call it a day” outfit — but now, it’s the clothing version of a shut-in. The color may have faded and the style may be just a few years behind what’s currently on the racks at Zara, but at home, “time” and “trends” are just words. The house dress is its own fashion moment, impervious to critique, and, as you’ve learned, stains! A good house dress just absorbs it all and embraces its new place in your life. 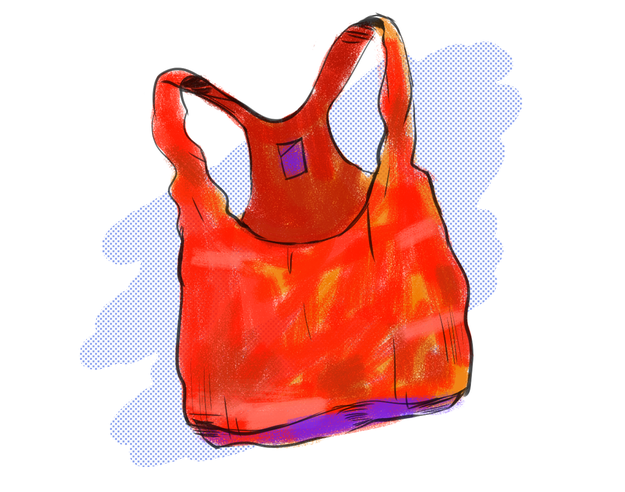 Seinfeld spent an episode convincing viewers that a bra is not a top, but you remain unmoved. On hot days, there is nothing quite like wearing a sports bra and nothing else in the comfort of your own home. Usually, the sports bra in question is stretched out enough that it’s useless for anything other than domestic puttering. The support it provides is incidental; instead, you wear it because it’s comfortable and lived in and as close as you can get to wearing nothing at all.

Plus, it helps you act out all your Brandi Chastain at the Women’s World Cup fantasies. Sometimes, you’ll throw on the T-shirt over this sports bra, but for the most part, it’s a solo act. Like Chastain, it needs no assist.

If you don't wear sports bras, you definitely have some kind of tank top with gaping wide arm holes that is so loose and breezy, it's basically like not wearing anything at all. Bliss.

The workout pants you don’t actually work out in. 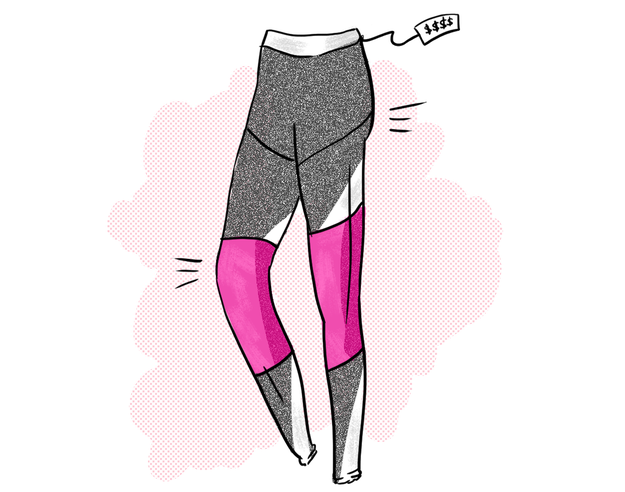 These exist for an entirely separate purpose than the sweatpants. Whether they're yoga pants, basketball shorts, or those snap pants Gob Bluth loves, workout pants are in a class of their own. Sweatpants are for extreme comfort, but the workout pants mean business. Although you rarely, if ever, actually exercise in the workout pants, you are definitely active in them. No fit of vacuuming is complete without them, and more than once, you’ve been on your hands and knees in them, rubbing scuff marks off the floor. Unlike most of the rest of your home wardrobe, you sometimes leave your house in the workout pants. This is partially because they give you the air of someone who is so committed to working out that they can’t bear to not be in them, but also because they are usually not inexpensive. Often, you invest in a pair that cost upwards of $50 because you think, If I spend this much on them, then I have to go to the gym…but eventually, they end up being mostly worn at home. And that’s ok! When you slip them on, you’re your most productive, which makes them well worth their price tag.

And the thick ass socks. 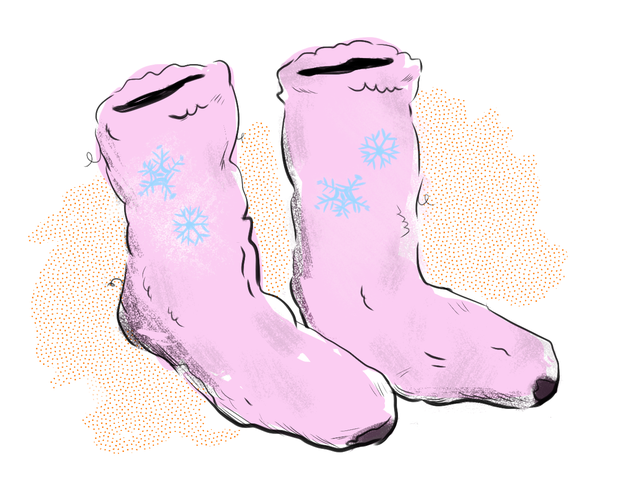 Not slippers!!!! Slippers are (obviously) made for the home, but socks aren’t always. These, however, are a special breed of socks. They’re the ridiculously fuzzy, warm, thick kind that are impossible to shove into most kinds of shoes. You probably got them from your mom for one of the holidays, and you might have internally scoffed at them at first, but now, you can’t imagine your life without them. These are the ones that are quarter-calf length, and after many hundreds of hours shuffling around in them, are so thin at the soles that you might as well not even be wearing socks. But you put them on anyway because you’re home, and being at home means seeking out any kind of comfort, no matter how impractical it may be.